Arrivy’s Route Planning feature allows Schedulers to create and edit routes for crews that have multiple stops/Tasks during a single day. With Route Planning, Schedulers can automatically create and optimize routes, rearrange Tasks within a single route or drag-and-drop Tasks between routes in order to balance them between your field teams.

Route Planning works differently from other features in Arrivy. The Route Planning interface provides a way to experiment with different Task layouts and assignments. Within this interface you can create new routes, drag-and-drop Tasks between and within routes, change route starting and ending times. No permanent changes are made to Tasks until you click the Publish button. Once you click Publish, all of the edits made in your Route Planning session will be propagated to the affected Tasks. Rescheduled messages may be sent to customers whose Task times have changed. Or, you can choose to have no messages sent.

The important thing to recognize is that Route Planning is an experimentation environment as opposed to an operational activity like Dispatch. You can work with Tasks on a given day; completely change times and assignments; save those changes and come back to your session three days later. No changes will be made to Tasks until you publish those changes using the Publish button.

You can access Route Planning from the Workflow nav.

Clicking on the menu opens the Route Planning environment. There are four main regions in the interface:

Elements of the Route Planning interface

For many companies, routes begin at a transportation depot where crews pick-up (and drop-off) the vehicles they will be using for the day’s Tasks. The Route Planning feature lets you designate depots as starting and ending locations for your Routes. You can define any number of depots in Basic Settings for a company, or in Groups Settings if you are using Groups. Depot addresses work similarly to the way you add multiple addresses to a Task. Simply click on the “Add Depot Address” button as many times as desired and input the address(es) in the corresponding field. Make sure to save your changes. 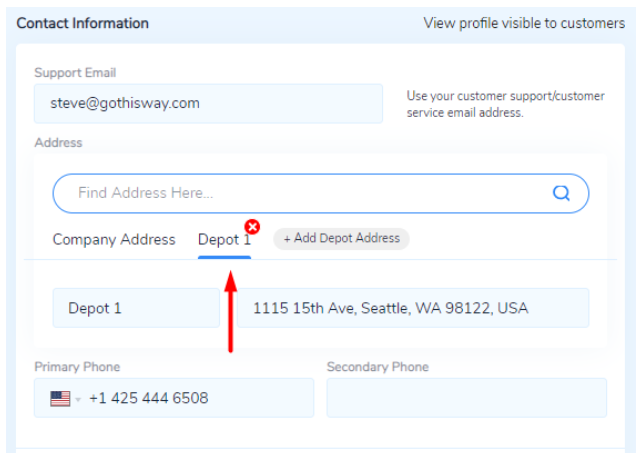 Specifying a Depot name and address in Basic Settings

Each Route can have its own separate Depot. However, a route must start and end at the same depot location. Within the Route Planning feature, there are two places you can designate a Depot for a Route.  Click the “kabob” menu on a Route card and choose Edit. The associated dialog will let you choose a depot, company or group location as start/end points.

If you use depots, the Map and Info Panel will show the Depot you have added to your route

Depot included in a route

Routes are automatically created using in the Route Planning interface by grouping together Task having the same assignees. They can also be created using the New Route button. The Sidebar contains Route cards and Task cards grouped under them. 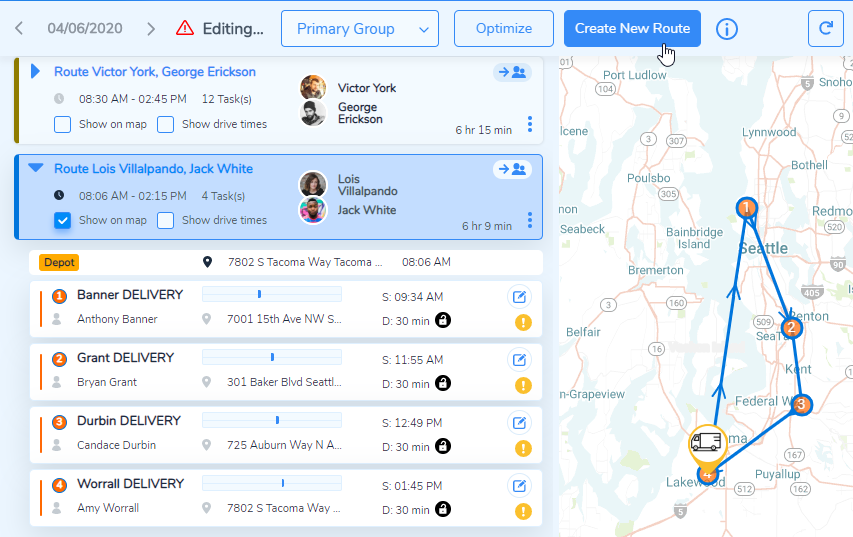 Route cards are similar to those on the dashboard. 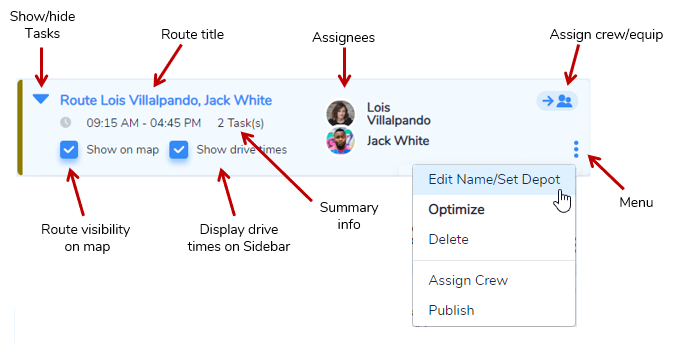 Task cards contain Task details and timing. The Task bar in the middle of the card provides a graphical representation of the Task timing, showing the time window and duration in color. By viewing the Task bars of a group of Task cards together, you can get a good sense for the sequence of the route.

You can change dates, start time, end time or Task duration using the Task Info dialog (by clicking on the clock-pencil icon on the Task card). Note that any changes to Task times made through this dialog will not affect the actual Tasks until the route is published. 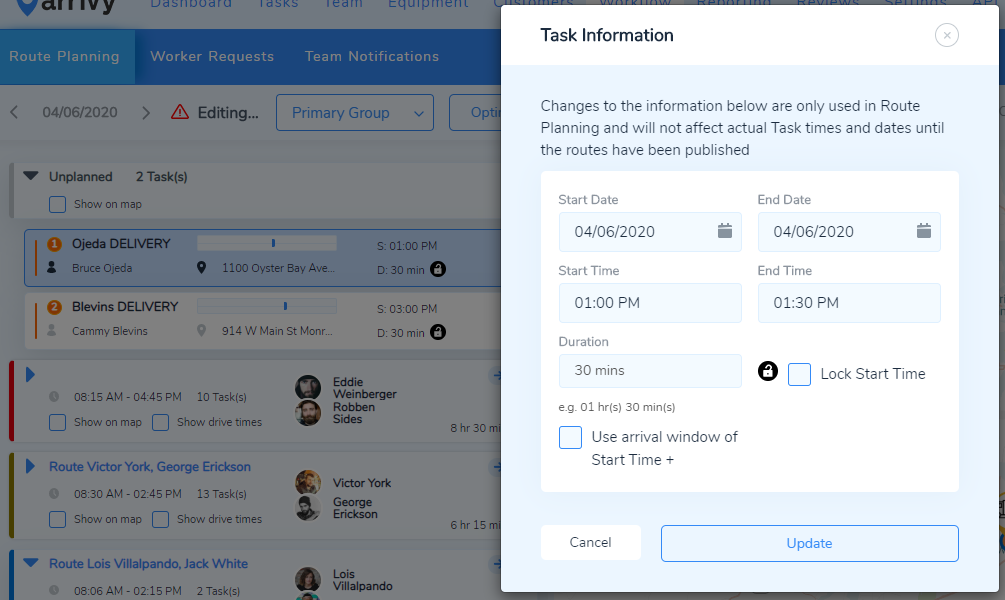 If the date, time, duration or assignees for the route have changed during the Route Planning session, the Edit Task button will be replaced by a yellow warning icon. Clicking on the icon will bring up a popover that identifies the changes and allows you to revert the changes and/or edit the Task. It will also flag issues–such as not having enough travel time between stops.

The Unplanned Route card is special. It cannot be deleted or renamed. It contains Tasks that are either unscheduled or scheduled with no assignees. The Unplanned route will only display Tasks plotted as individual pins/circles–not as a continuous route. 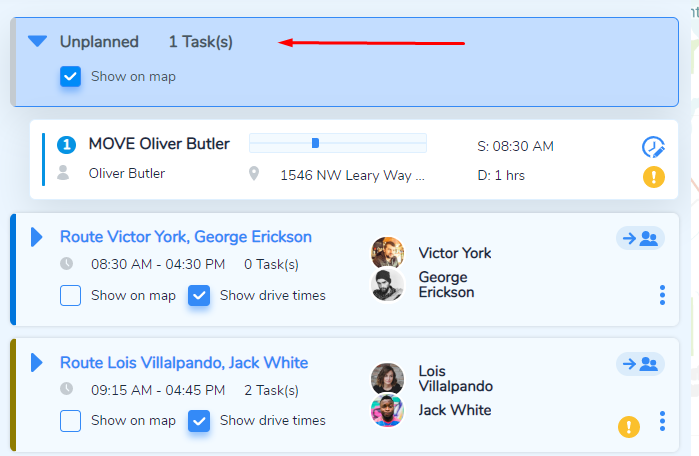 Route Editing in the Sidebar

The interface for route editing is primarily drag-and-drop. When a Task is dragged and dropped the start and end times are affected. The duration and time window stay constant. As the Task is dropped, the affected Tasks (those following the one dropped) are reordered based on the calculated travel times and Task durations. 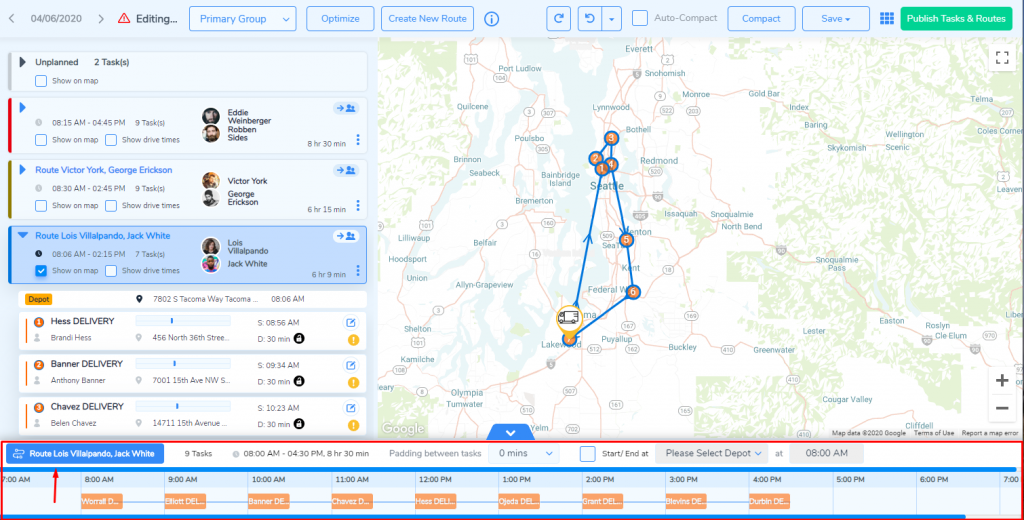 The Info Panel in Route Planning

If a Route is selected, the panel shows a variety of information and options, including:

If a Task is selected, the info panel shows:

Arrivy Route Planning incorporates very powerful algorithm for performing Route Optimization. The process of optimization is inherently time-based. Arrivy will rearrange your Tasks so that you can perform as many Tasks as possible in the least amount of time. You can choose to optimize an established route by rearranging the order of your Tasks; you can create new routes for all the day’s Tasks; or you can create routes and optimize the Tasks in the Unplanned route. In order to achieve optimal and predictable results, you need to understand “Task constraints” such as time windows, lock and unlock.

The object of optimization is to rearrange your Tasks in order to minimize the total amount of time, which includes both the Task time (i.e. Task duration) and travel time. Sometimes you have the flexibility of changing the start time of a Task to anytime during the day. And, sometimes, customers require the service call to take place within a very narrow band of time. You can use time windows and the lock icon to help specify how flexible or inflexible the Task start time is, when optimization takes place.

You can invoke the optimizer from either the button on the Command Bar or the “kabob” menu on a route card (if you are only interested in optimizing a single route). The optimizer options are detailed below:

Route Optimization now allows limiting the number of tasks aka jobs that can be completed in a single optimized route. 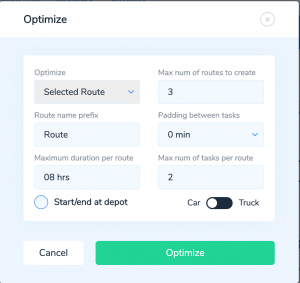 Route optimization is both an art and a science. While the algorithms for calculating least-time (or least-distance) routes are fairly well established, you can get radically different results depending on how you organize Task constraints (such as lock/unlock and time windows) as well as route constraints (such as the number of routes and route duration). Additionally, there are human factors–drivers who can only work a fraction of a day, for example. So, frequently, you can expect to try out multiple optimizations with different routes and Task parameters. Remember, you can take any route and continue to work with it manually–dragging and dropping Tasks to see how they affect route times and configurations. See the Snapshot topic in the next section for intelligence on how you can compare multiple route configurations.

After clicking the Optimize button in the Optimize dialog the server will spend some time calculating routes and then return with a dialog that summarizes optimizations results (as shown above). You can accept these results by clicking “Apply” or cancel and return to your original configuration.

You can click the Save button on the Command Bar to save the changes you’ve made during your current Route Planning session to persist them until your next session. If you don’t save your changes they will be discarded when you navigate to a different page of Arrivy or close your browser tab. Save will not make permanent changes to your Tasks. You must use Publish in order to affect permanent changes to Tasks. Use the Save & Name command to store/restore route configurations that you would like to compare using the Snapshot facility. 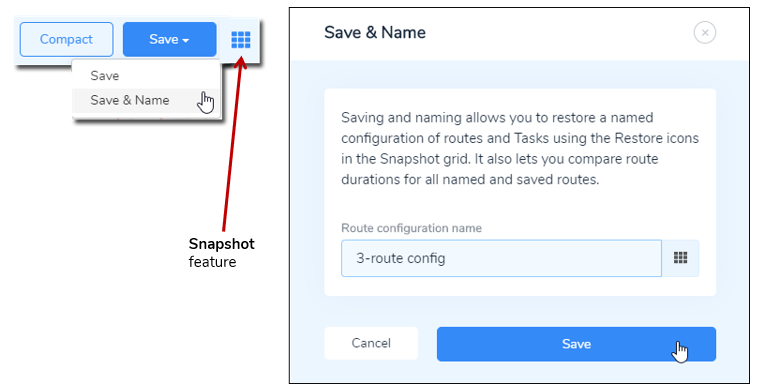 Save and name lets you save and restore route configurations 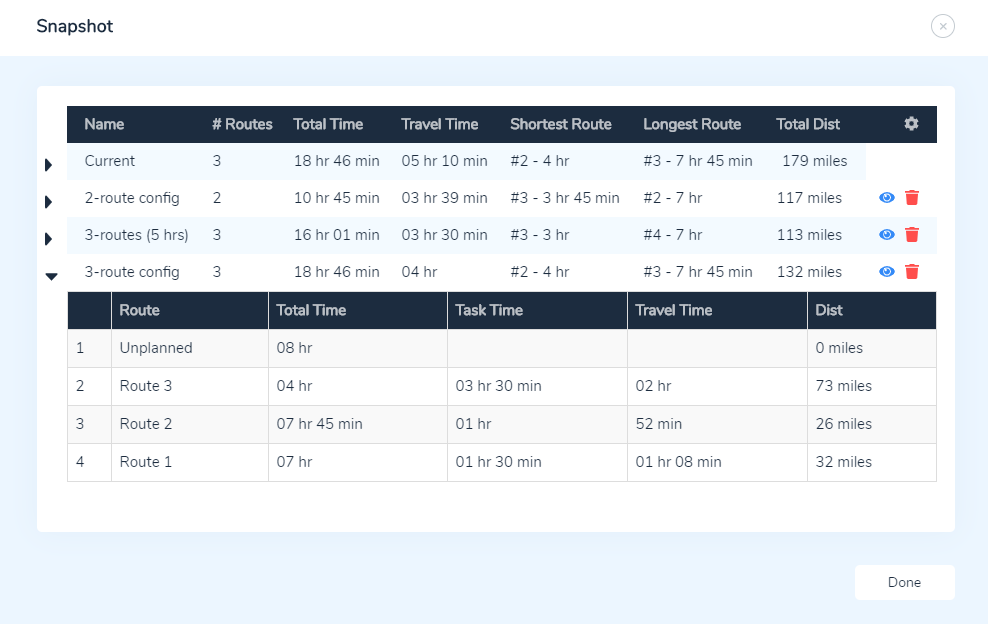 The Undo and Redo button allow you to step forwards or backwards through any changes that have been made to routes or Tasks within the Route Planning interface. The Revert button–which is under the caret to the right of Undo–will reverse any changes made and reload the original Task times and assignments.

Compacting is the process of rearranging Tasks within a Route so they are sequenced as closely together as possible. The best way to understand the Compact command is by looking at an example. In the screenshot below, the Info panel shows 3 Task where Tasks 1 & 2 have a 3 hr spread and Tasks 2 & 3 are overlapping. Obviously, this is a non-optimal layout. 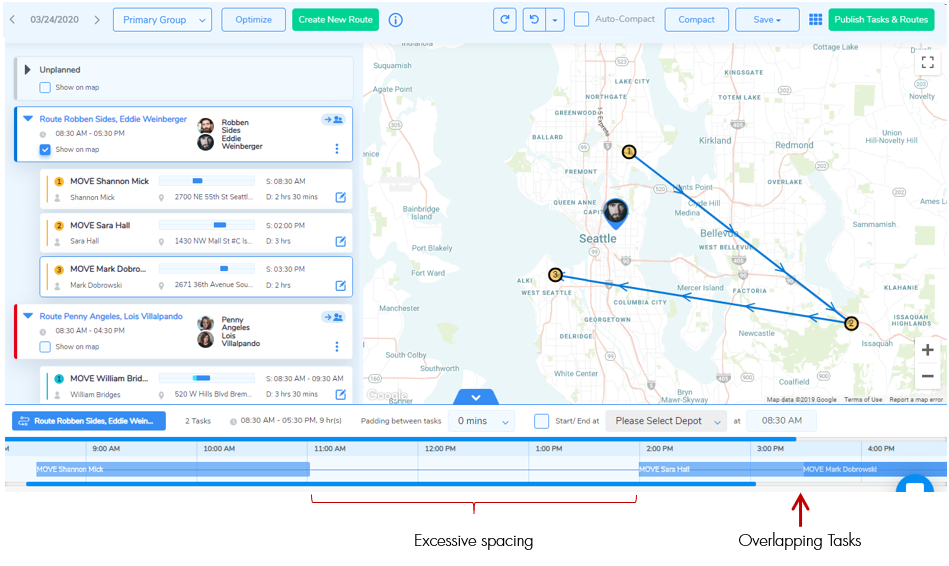 Clicking the Compact button on the Command Bar will re-jigger the series of Tasks on a Route by taking the ending time of the Task 1, calculating the drive time for Task 2, setting the start time for Task 2 equal to the end time for Task 1 + drive time to Task 2 and repeating for subsequent Tasks. You can also add “padding” to add extra time between Tasks to account for unpredictable drive times or as extra “margin.”

You can use the Compact button manually, or select the Auto-Compact checkbox on the Command Bar to automatically have a Route compacted when you make changes. If you have selected to start and end a Route at a depot the Map and Info Bar will reflect that.

Note: Arrivy will compact a route beginning from the start time of the first task of the day. The depot start time is set independently. You must make sure that you have allocated enough time to get from the depot to the first Task. 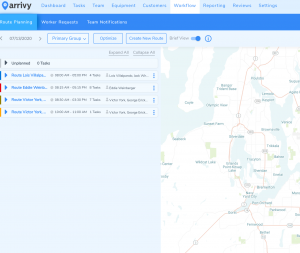 Expand All and Collapse All

Expand All allows you to expand the team members’ routes, making all the contained tasks visible to the user. It opens all the routes so that you have a comprehensive view of a given day in the left panel, and all your routes/tasks are visible on the map. As apparent by its name, Collapse All does the reverse. 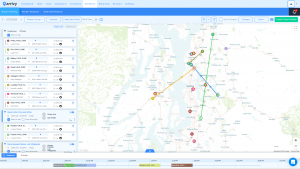 The Publish Tasks & Routes command takes all of the adjustments to time, sequence and assignees made during a Route Planning session and makes those changes in the original Tasks. Thus, if your original Task was assigned to Eddies for 10:30 AM and through your Route Planning session was reassigned to Robben at 2:00 PM–the Publish action will copy those changes into the original Task. Once you have Published your routes, you cannot recover the previous times or assignments. You CAN do Route Planning on a set of Tasks that have already been Published. However, your starting point will be the previously Published Task times and assignments.

Normally, if you change the date or times of a Task, the customer will be sent an email and/or SMS message letting them know their Task has been rescheduled. This will also happen as soon as you Publish your routes (for all the Tasks that have time changes). However, you do have the ability to suppress these communications when you execute a Publish. When you click the Publish Tasks & Routes button, it brings up a dialog which lists all the Task changes. Additionally, the Publish changes without sending messages checkbox in this dialog let you suppress Task-rescheduled messages that would occur because of the Publishing changes.